skip to main | skip to sidebar

A part of my childhood died when I read about the death of Karl Ehrdhardt. To the uninitiated, he was the Shea Stadium Sign Man and was a fixture at Mets games in the 60's and 70's.

The following excerpt come from the New York Times:

By 1969, Ehrhardt had become a fixture at Shea. That year, when left fielder Cleon Jones squeezed the final out of the World Series in his glove, the Sign Man, too choked up to talk, reached into his bag of shticks and pulled out:

"There Are No Words."

Rest in Peace Good Sir, you will be missed.
Posted by Chuck at 5:35 PM 2 comments:

It looks as though the Mets are gonna have to sell a CRAP LOAD of these jerseys in order to pay Johan over the next 7 years. Normally, I'd go nuts and deride the Yankees and their fans for spending this kind of scratch but its my very own Mets who have won American Idol - The Fiscally Irresponsible Edition this season. Bearing this in mind, I will be the Ultimate Hypocrite here and applaud Omar Minaya, the Wilpons (and Jeff Wilpon's funky hair) for taking the Mets to the next level. Yes the money is obscene and yes, no single player is worth that kind of money (thanks for CONSTANTLY reminding me of that, Dad) but if the Metsies didn't pay it, someone else would have.

So, this time I'll turn a blind eye and a deaf ear to spending so much escarole. However knowing me, I'll get really pissed the next time the Yankees do it.

By the way, the mailman was nice enough to deliver one of these cards to me this afternoon. I've decided that next Christmas, he definitely gets a tip!! Last year, I gave him a McDonald's gift card. My pal Anthony pointed out that McDonald's gift cards are "Gifts you give to a retard". Oops! 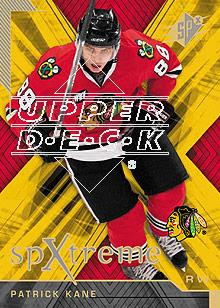 Mine is #'d to 999 so I'm hoping I can schedule a picnic for me and the other 998 Kane loving hockey fans out there. I wonder how much potato salad I'll need to feed that many people??
Posted by Chuck at 7:44 PM No comments:

Santana is a Met!

Well, the war of attrition has finally ended. Pending a physical and their ability to work out a contract extension, the Mets will send Carlos Gomez, Phil Humber, Kevin Mulvey and Delois Guerra to the Twins for Johan Friggin' Santana!!! Yes, they gave up alot but they kept Reyes, Pelfrey and F-Mart in the fold. While its obvious that having Santana doesn't guarantee a pennant, it vaults the Mets ahead of the Phillies and Braves for dominance in the division.

From a collecting point of view, I don't think Gomez really showed what he's capable of last season. I feel as he blossoms as the Twins everyday CF, his cards will steadily rise in value. I don't think Humber will be much more than a middle of the rotation guy, however Guerra has a chance to be very good.

Whew, now I can take my Santana cards and move them ALL to my Mets binder!

Well, I watched the NHL skills competition last night and while I can't say its the worst thing I have ever witnessed, it is very close. The events were extremely lame and honestly didn't look to be all that much fun. They tried to add more pizzaz and fan interest by allowing the players to use creativity when they handeled the puck and took shots on goal. If anyone saw the film Hostel, then you know that asking eastern europeans to be creative never, ever ends well. Besides, there is only so much hocus pocus one can do with a puck and a stick. Bless his russian heart but while Alexander Ovechkin tried his best to play along and have fun, he should have taken this weekend's festivities off and visited a dentist immediately. I have never seen "teeth" like his in a human being. I will get down on my knees and pray that Alex uses some of that $124 million on quality dental care. Oh and the "red carpet" interview segment was a royal howl as well. Look, talent aside, hockey players aren't the flashiest group of guys in the world. They are mostly shy and unassuming and frankly alot of them could use some conversational english lessons.

So, the NHL layed a decent sized egg with this whole gala weekend nonsense. I would have loved to see the Young Stars game cut and replaced with the NHL Legends contest. There is something disturbingly wonderful about watching the maniacal Tiger Williams ride his stick after going 5-hole on Cesare Maniago.

Maybe if NBC televised the darn thing and the league gave a teeny bit more thought to making the events remotely exciting, the NHL, its players and its fans would be a heckuva lot better off.
Posted by Chuck at 12:27 PM 2 comments:

Last night, the New York Rangers retired Brian Leetch's #2 in a ceremony before the Rangers/Thrashers game. Overall it was a wonderful night celebrating the greatest American-born defensemen in league history. They even announced that next season Adam Graves #9 will hang in the rafters of MSG along side Gilbert, Giacomin, Messier, Richter and Leetch. I think the Rangers should probably pull the reins in on retiring numbers for awhile, unless they really feel an overwhelming need to have "Kelly Kisio Night". (By the way, Kisio's #11 has already been retired with Messier's name above it, so the ceremony could get a bit uncomfortable). One thing MSG and the Rangers always manage to pull off for these events is bringing back "Ranger Legends From the Past". Its nice to see the older guys once again putting on the sweater but honestly some of these cats aren't in the best shape anymore. Heck Brad Park looks like my Uncle Mel for crying out loud!!! One constant at these ceremonies is old #7 himself, Rod Gilbert. He is a cross between a goodwill ambassador and that tipsy uncle who never wants to go home on Thanksgiving. In fact, Rod is at the Garden so often, I'm beginning to think he lives in some dark recessed corner on the 33rd Street side.


Anyway, the ceremony got me thinking about collecting so I pulled out the hockey binders and searched the pages for any Ranger cards I could find. I hit a bunch of Messier's and Gretzky's, found some Richter's and Leetch's and stumbled upon Tony Granato, Jan Erixon and good old #11 Kelly Kisio!!. Seeing these carda again gave me a weird sense of connection to the team I love so much. They weren't anything special, mostly commons and inserts from cheapo blasters and packs I picked up along the way, yet there was something new and kind of beautiful about them, something I never noticed before.


Oftentimes we collectors get caught up in the hoopla of a hot rookie or the amount of $$$ a particular card will bring back in sale. Hell, I'm just as guilty as anybody on these counts. But sometimes the stars align perfectly and you're able to see the beauty in cards that had been long forgotten.
Posted by Chuck at 5:51 AM No comments:

So, I just finished opening the last of my 6 boxes of SPX Hockey. By far the hottest card I pulled was a GU/Auto Patrick Kane RC #'d to 499. I hit some Sids as well as Gretzky, Messier and Mr. Hockey himself, Gordie Howe. I will pick up some singles here and there but for the most part I'm done with SPX boxes. At some point I'll be putting stuff up on "that auction site that's so popular with the kids these days" but more on that at another time. I will be in Full Metal NHL Mode for the rest of the week. Brian Leetch gets his number retired tomorrow nite by the Rangers at MSG and then NHL All-Star Weekend begins. If its medically possible to fall into a hockey-induced coma, my chances appear to be excellent over the next 4 days.

I will watch the Superbowl (do I owe anyone money for using the actual name of the event?) and root hard for the Giants. However, my mind is beginning to focus on baseball again. I picked up Baseball America yesterday and I can feel the itch begin creep its way up my body now. I am anticipating Topps and UD 2008 Baseball releases and honestly I can't wait. For us baseball fans, the month of February is the longest of the year. so I hope the new 2008 stuff helps the time go by a bit quicker. Of course, I would really be jacked if the Mets could land Johan Santana before we elect a new President but there hasn't been much movement on that front.

Speaking of the Santana situation, I was thinking about the Twins GM (Bill Smith) and while I respect the fact that he's trying to get the best deal he can in return, his hemming and hawing has painted him into a corner. He already lost ANY possibility of getting Phil Hughes from the Yanksees because of his terminal indecision. At some point, he has to quit being tenative and pull the trigger. As it stands now, he is coming off as scared and that is no way to run a team. Even though I rue the day he was ever born, ex-Met GM Jim Duquette stuck to his convictions (as misguided as they were) when he decided to trade Scott Kazmir for Victor Zambrano. It was a risky deal that ultimately cost the Mets dearly as well as costing Duquette his job. Kazmir was an unknown quantity (by Major League standards) and Zambrano was a promising young arm. As it turns out, Kazmir is now a human strikeout machine and Zambrano walked off the mound at Shea crying for his mother because his elbow was shredded. The point is that Duquette went ahead with the deal because he thought it was in his club's best interest. At some point Smith has to take a deep breath and make a move, no matter what the possible outcomes may be.

Be that as it may....a pox upon thee James Duquette!!!

Wow, I actually feel better!!!
Posted by Chuck at 7:50 AM No comments:

Well, not exactly Rio, but I did return from my Target adventure last nite and I must say I was pretty happy. I won't bore you with specific packs and such, as I didn't land anything earth-shattering. I did pick up some sweeet hockey cards for the pc as well as 2 Phil Hughes cards from 2007 Topps 52 Rookies packs. I also cheated a tad and picked up one of those pre-packaged Topps 2007 NBA Rookie sets just to say I own 1st year cards of Durant, Oden and that huge Chinese guy from the Milwaukee Bucks.